(on Blindfold Trust, 2017, a joint photo-project by Arina Essipowitsch and Dominique Hille)

I confess: when I had the privilege to see this photo book I was impressed from the start by the looks of it: so simple and yet so sophisticated! an opaque-mate paper jacket holding the photographs together. The two folds of the cover, dark grey and smoky white-grey, each with one name written on it: Essipowitsch and Hille, respectively. One fold can be placed on top of the other and the other way around, so that both names come together and read like a full name: Essipowitch Hille or Hille Essipowitsch. Two family names superimposed on the mysterious, atmospheric photo of a bird on the background of foggy morning waters. 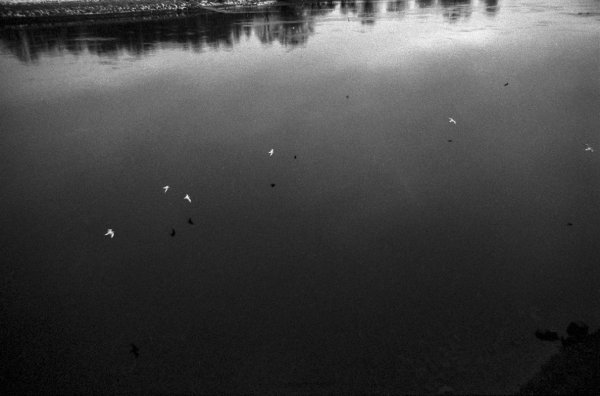 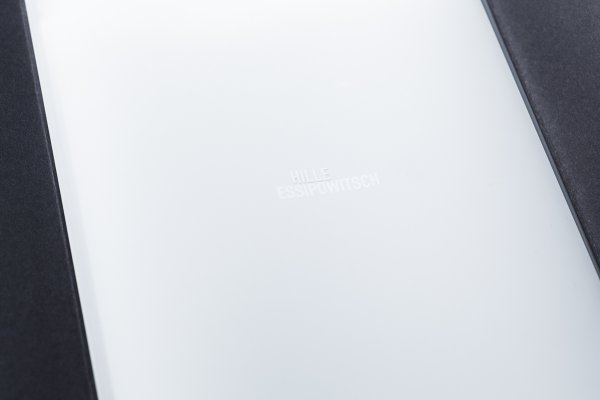 And what hides behind this fume-coloured cover-curtain? black and white pictures taken somewhere close to a river, in a landscape for which the French word "la friche" first comes to my mind, a sort of no man's land without a name (in one photo a detail anchors the image geographically- and it's yours to discover). Some photos were shot by Arina, others by Dominique and when looking at the outcome they found their images could have been taken by either of them. With a shared vision, how could the photos not belong to both of them now?

This unbound book with one page over the other has its contents bound by a sense of poetry. A book-poem disguised under images of a cold day in a barren wild landscape with two young lady photographers playing with tree trunks, photographing each other (more often coated than naked) and looking at the world from unusual standing points Theirs is the bridge pose, reminiscent of childhood, which they both adopt in a couple of photos. One picture caught Arina/Dominique doing the bridge, while another one shows her friend attempting to fall into it. 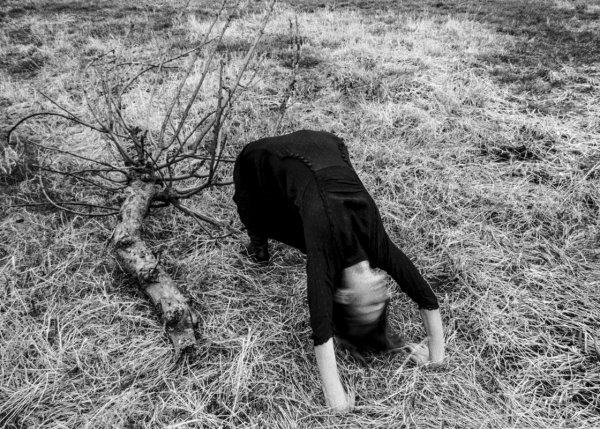 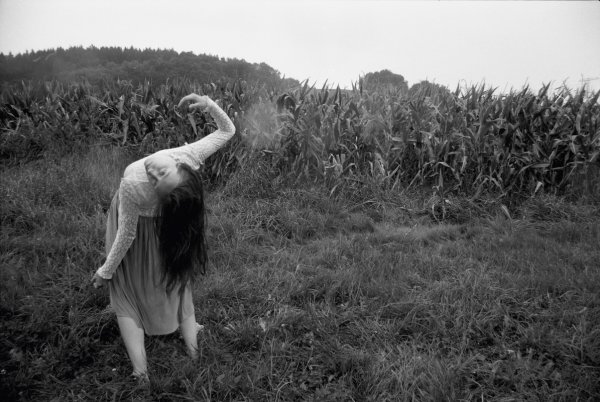 To me, this figure also suggests the contorsions we do as (becoming) adults when we try to make sense of the world around us; and our attempts to look at the world afresh.

This joint collaboration between Arina Essipowitsch and Dominique Hille is quite sophisticated, but in a very distinguished, low-key manner. It is not a thematic project about un-cultivating the adult in them or in us. Rather, it is a project concerned with showing how playful we are and how tuned in with nature and another person we can get.

Hille/Essipowitsch banned the common eroticism attached to women photographed in a landscape from entering their playground. And the outcome is so unusual and strange, that I don't yet have all the matching words to describe it... The rawness of some gestures caught on camera and the photographers' disregard for conventionally attractive postures bring images from Pina Bausch's choreographies to mind.

The melancholic, softly bleak atmosphere (unkempt, wild, deserted riverbanks and dried tree trunks in black and white) reveals a poetic resource of playfulness and companionship. The pictures complete each other: the landscape travels freely from one photograph to another, the story is out of frames. There are recurring motifs and shared perspectives. See the photos taken from the ground, as if one could also take a picture while doing the bridge figure. This series is also made to intrigue the mind... 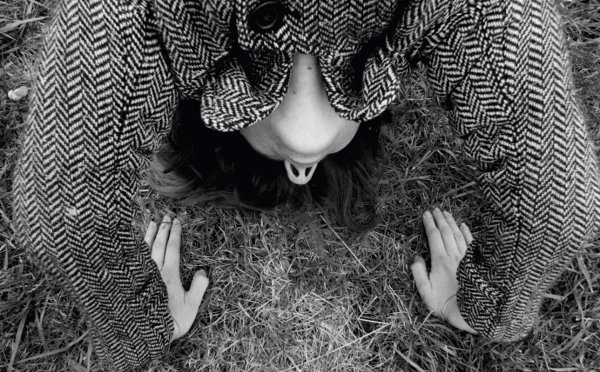 Hille/Essipowitsch's creative endeavour is concerned with freedom, mutual inspiration, discovery. It is not a sunny day the artists photographed and choreographed, but the energies caught on camera are playful and mysterious, warm and engaging.

Entering this project of photographing together, making a book and sharing the copywrite (thus abandoning something which might be called the artistic ego), Arina and Dominique become, for a while, each other's alter-ego. Arina told me it was hard work arranging the photographs so that they match each other the way they do: right and left, on both front and back sides! Some few exceptions are welcome rebels.

This matching of the images, however diligent and detail-oriented it was after the photo session (in the so-called post-production), makes me think of the photographers' flow (they called it blindfold trust) during the photo session. The photographers enjoyed prolonging each other's sight and choreographing on a chilly day. The combination of their names is also a choreography. It might have come after the work and play were done, but it welcomes you before opening the book. Enjoy! 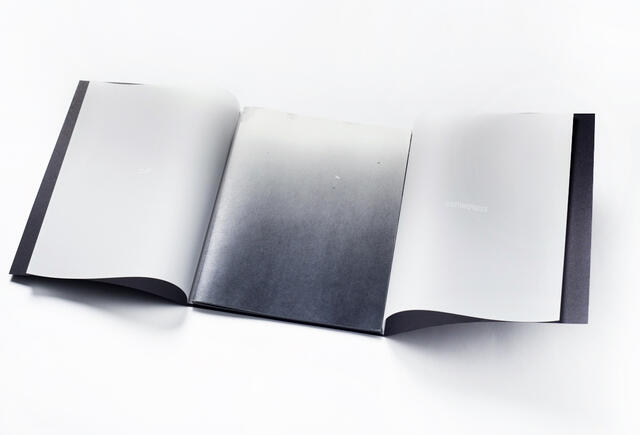